Mobile Learning: reflecting on the state of play

It’s been a year since i published ‘Mindset for Mobile Learning‘ and a lot has changed. Predictably, most of it in unpredictable ways. My own perception is that conversations within the organisational learning space have not progressed far, whilst the permeation of mobile mindsets into our social lives has accelerated. C’est la vie. 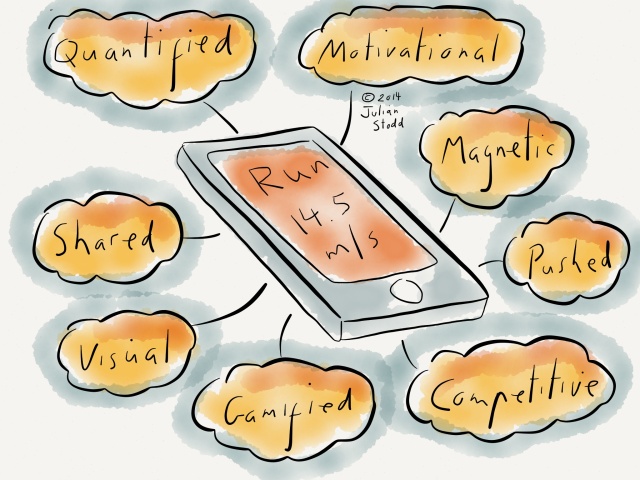 Mobile learning is progressing slowly: despite the initial rush to deploy, we’ve seen relatively little innovation in methodology. The emergence of the Quantified Self may change this

After the initial rush to ‘go mobile‘ and the slew of ‘mobile Learning Management Systems‘ that promised the earth and delivered a bill, we have seen limited innovation. Why? Probably because most of the early efforts were simply adding to budgets whilst failing to deliver results. The vanity projects to deliver something, anything, have run their course and the technology has enabled the low hanging benefits of simply making stuff accessible. That’s not to be sniffed at, but it’s not a revolution. It’s an infrastructure enhancement.

By contrast, interest in Social Learning approaches has never been greater and, i suspect, will drive renewed interest in mobile, as a means of keeping us engaged with those ‘sense making‘ communities. I’d be happy to see that trend: innovation in technology aligned with the socially driven desire to connect, more about developing a mindset than a chipset. For me, at least, mobile is always going to be a means to an end: to be better, to be more effective. It’s a mechanism and technology for engagement and sharing and, like all the best technologies, it takes us a while to figure out what the heck to do with it.

I’m a Trustee of Drake Music, a charity that enables young people with physical disabilities to gain access to music, to compose and to play it. Their approach is typical: keeping a keen eye on the innovation and being unafraid to try new technology as it appears, but the ultimate uptake and success of new gadgets depends on their ability to enhance the learning experience. Gimmicks alone may catch our eye, but are unlikely to have longevity.

Where we have seen great interest is around what’s come to be known as the ‘Quantified Self‘. I’m not sure who originated the term, but i first heard it from Jane Hart. Now i see it everywhere. There’s nothing new in the desire to measure things, but mobile lets us do this on the move and in a wide range of dimensions. Not only can we measure speed, direction and height, we can measure these things over time and we can overlay them with qualitative dimensions. So, when i go for a run, the App asks me how i feel at the end. Did i feel good? Was it raining? How does my time compare to Sam’s and how am i doing against my overall goals. Not only does it set targets, it provides me with a ready formed narrative of my progress towards them.

It comes back to storytelling: but it’s a story that i write through my activities and which is told by the technology.

These learning journeys are emergent, co-created in collaboration with the devices, not imposed from outside, and they are gamified: shared on Facebook and through various communities for build social pressure to improve.

Again, when i go running, if someone ‘likes‘ that status update on Facebook, i get a cheer in my ear. A gimmick? Maybe, but it engages me with my community and, as community sits at the heart of the Social Age, maybe it’s significant. It certainly spurs me on.

Our ability to measure things is not in questions: our ability to do so as part of a coherent story is another thing though. The running, dieting and cycling Apps do this easily, but what about learning, leadership and compliance training? A harder story.

Just because we can quantify things doesn’t mean that we should. If our story is not coherent and magnetic, we are just imposing it on unwilling listeners, a mistake that organisations should be keen to avoid.

We’ve certainly seen a continuation of the opening up of the ecosystem: few corporations still maintain rigid bars on ‘bring your own device‘, except where legal or regulatory frameworks prohibit it. Certainly among Exec teams we’ve seen widespread adoption of iPads as well as some innovative Point of Sale applications.

The manufacturers continue to innovate, primarily it seems around the insane density of pixels they can fit into a camera: forty two megapixels being the highest i’ve seen so far, which is staggering. The tablet market is stabilising, with most of the main players now in the game and some credible mid cost alternatives to Apple: although i’ve not felt widespread adoption or excitement about the Microsoft Surface tablets, to me they seem robust and i suspect we’ll see greater adoption in Education as they form a reasonably priced entry point.

But the core of learning design remains relatively unscathed: maybe because implementing new technologies remains expensive in terms of develop time and, to be blunt, there aren’t that many great ideas out there yet. Don’t get me wrong: there are some fantastic innovations in terms of learning applications, from museums to science Apps, but in terms of the more run of the mill applications for learning design, nothing more exciting than tiny multi choice questions and text. Which is unsurprising as the innovation really needs to come in storytelling and, most likely, will be in blended learning, where the mobile technology forms just one part of the ecosystem.

I’m broadly positive about how mobile is being implemented: at least we haven’t seen too much in the way of expensive attempts to deploy all training to smartphones, but neither do i feel we’ve really felt much of the positive. I think it will take time for learning design to catch up and i feel that much of the innovation will be as part of social learning approaches.

8 Responses to Mobile Learning: reflecting on the state of play