I’ve been exploring pressures on organisational culture over the last week or so, looking at how we align our internal values with those of the community and, in turn, choose our course of action. Rifts open up when our personal values and beliefs are misaligned with those of groups or the wider organisation. Having shared the early stages of this with the community here, i’m focusing on on aspect: how culture is framed and co-created. 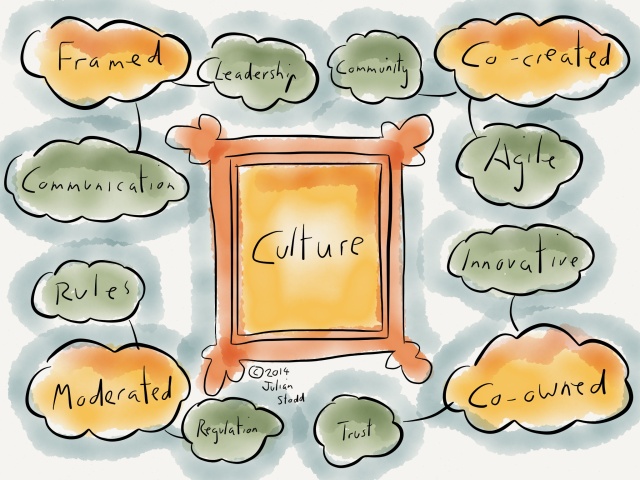 Culture is framed by the organisation, but co-created and co-owned by individuals

The organisation is not a thing: it’s a group of individuals aligned around common purpose, overlain with a formal structure and informal relationships. In this sense, an ‘organisation‘ can’t ‘own‘ anything, so when i talk about the organisation framing culture, what i mean is that position that is taken by leadership and through processes to define action. It’s the strategic direction that is implemented by managers.

When i say that ‘in the Social Age, culture is framed by the organisation, but co-created and co-owned by the community‘, what i mean is this: in the old days, we would look at culture being defined by the organisation and inhabited by individuals. When you joined the organisation, you conformed to the culture, or left. My view is slightly different: i believe that culture is co-created in the moment, through our actions. It’s the measurable outcome of activity, not a fictionally descriptive mission statement. You can say you have a culture that is tolerant of mistakes, but unless you actually tolerate a mistake, it’s just a fiction. The proof is very much within the pudding.

Let’s consider four aspects of control around culture: framing, co-creation, co-ownership and moderation. Framing is our strategic direction: it’s about leadership and communication. Co-creation is about how this is realised in the community. It’s about being agile and responsive to the reality on the ground whilst remaining true to the strategy. This is where ‘culture‘ is first manifested.

Once we’ve defined it, it’s co-owned: to be successful ‘lived’, there needs to be trust and innovation. Finally, there is always an elements of control and moderation: through regulated and rules (but these may be co-created and co-owned.

This is a simplified picture, but i wanted to expand the notions of ‘framing‘ and ‘co-creation‘.

Social Businesses need to recognise that they can frame culture, but not own it: they can be in the conversation to co-create it, and they can participate in the models of moderation and ownership, but as culture is ultimately about people and behaviours in the moment, it has be be a collaborative process.