Posted on January 7, 2014 by julianstodd

The Banks have failed us: that’s the message we took out of the financial meltdown, but how? Can we blame culture or individuals? Are organisations largely good, with small pockets of bad, or did we all fail by degrees? Where is the rift in trust? Are our values deterministic or do they evolve to justify the ends? 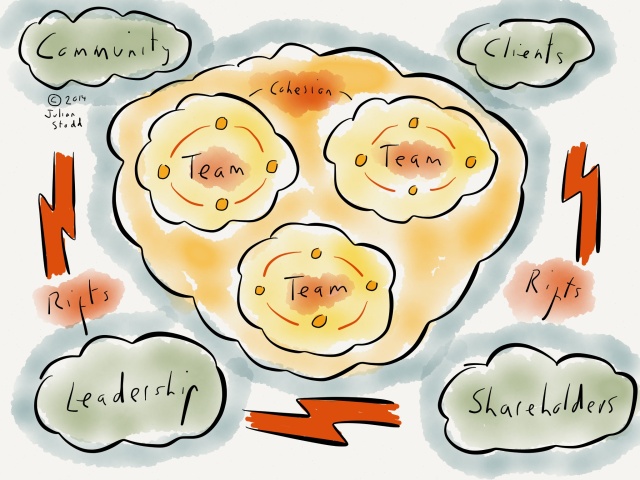 Trust may not be universal: when cultures fracture, it may be because of conflicting dimensions of values. Identifying these is the starting point to changing behaviours

Yesterday i introduced the CAIR Model of Organisational Culture. It’s an attempt to characterise four dimensions of pressure on cultures, pressures that can cause them to fracture. It’s a recognition that culture may fail not because people are bad, but because they make bad judgements in response to opposed pressures: the pressure to be profitable vs the pressure to be sustainable, the desire to belong to a company team vs the desire to be respected for your values by friends, the need for financial security from having a job vs the need for leaving a legacy you are proud of. Some of these oppositions are impossible to resolve, and vary by individual, but in a world where culture is co-created, an understanding of this can form a foundation for action.

Culture is co-created and co-owned by the community. Whilst it may be framed by regulated and organisation, it’s not imposed. The CAIR model seeks to understand the (often conflicting) pressures that lead to exhibited behaviours and is based on a belief that through understanding them we can build a stronger learning culture to counter the corrosion.

My aim is to develop a diagnostic framework around the CAIR dimensions, allowing us to work with groups to learn what influences us to act in the ways we do, and to understand the co-creative nature of culture to think about how we can collectively reform or repair it. If culture is co-created in the moment, it’s only through understanding and action that we can reform it. Pressure from the top or from outside may not be enough.

Look at the illustration above: I had some initial feedback to CAIR from Robin, who pointed out that there are degrees of trust internal in organisations. People may trust teammates, but apply a different standard of trust to the organisation. It was a good point, and i’m trying to reflect it here.

There are extant bundles of trust relationships in any culture: these may be teams or less formal, but usually there is some structure. Around these team dynamics lie leadership, shareholders, clients and friends. CAIR shows that it may be hard (or impossible) to maintain two simultaneous dimensions of culture: to be true to our personal beliefs and expectations of friend groups may be counter to being part of a high performing team chasing profit. The small decisions we take to address these relationships cumulatively impact on culture.

Organisations are not made up of one dimensional populations: ‘leadership‘, ‘workers‘, ‘shareholders‘, but rather of fluid groupings based around shared interests, formal responsibilities, tasks or projects, but the principle is this, that membership of these communities comes at a price. We cannot be all things to all people, and the concessions we make can cumulatively toxify culture.

How elastic culture is can be questionable: are there degrees of integrity? Relationship psychology would indicate that there are: we are closer to some people than others, but can we be closer to compliance, or closer to honest? Whilst it’s tempting to say that ethics and moral values are absolute, it would be nonsensical: they are highly subjective and subject to interpretation. What shareholders consider to be good value may be far different from what the green lobby or your friends do.

We saw this playing out recently when the Church of England was caught in a vice around so called ‘payday lenders‘. Whilst the Archbishop was busy criticising these lenders as immoral, the church accountants were investing in their shares. Were they right to do so (as i write this, they still haven’t sold them as they want to exit without loss: is that right or wrong?)?

Different pressures can influence our viewpoint. In the example above, we could say that the Archbishop was being true to value of fairness (it’s wrong to trap people in a debt spiral), whilst the accountants were being true to values of legacy (if the church is financially strong, it can offer facilities and support into the future). Even the question of exiting these investments is complex: should they sell at a loss (betraying ‘shareholder‘ value, or exit elegantly). Or, for that matter, remain engaged and take on the enemy from within. Has this situation toxified the church’s culture? It’s certainly impacted on it, disproportionate to the level of investment itself.

Banks are not full of bad people: but they have behaved badly. They are not alone: but the solution does not lie with censuring a small number of malcontents. It’s not as simple as saying that greedy people are bad. That’s neither fair nor accurate. You don’t have to conform to liberal values to be right. But you do need to be true to yourself, which is why CAIR may help us to diagnose fracture points, to identify where rifts occur and, perhaps, to bridge them.

If we maintain a naive but comforting view that we just have to cut out a cancer, we are failing to recognise the joint responsibility for toxicity. Cultures are complex, co-created and co-owned, but they are fluid and adaptable. The trick is to understand how.

29 Responses to Rifts in trust: how organisational culture fractures